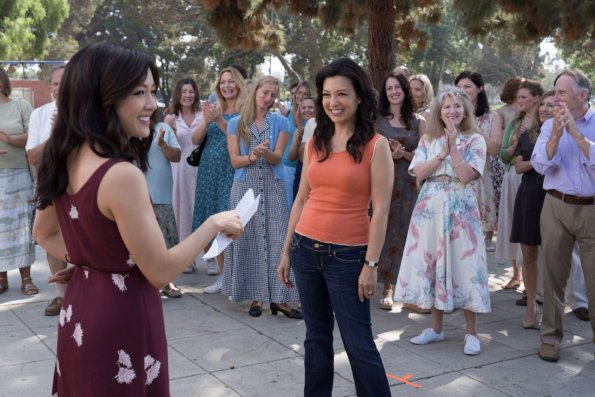 FRESH OFF THE BOAT - "Mo' Chinese Mo' Problems" - Jessica and Lewis are thrilled beyond belief when they discover that a Chinese family - Elaine (Ming-Na Wen), Julius (Reggie Lee) and son, Horace (Jimmy O. Yang) - have moved into the neighborhood. Jessica immediately bonds with Elaine, who helps her solve an issue with the HOA, and Louis decides to introduce Julius to Marvin and hang out together. Meanwhile, when Evan goes door-to-door collecting information for the census bureau, Eddie and Emery come up with a plan to impersonate being census takers in order to find out when the owners of a pool are out of the house so they can sneak over and use it, on "Fresh Off the Boat," FRIDAY, NOV. 9 (8:00-8:30 p.m. EST), as part of the new TGIF programming block on The ABC Television Network. (ABC/Byron Cohen) CONSTANCE WU, MING-NA WEN