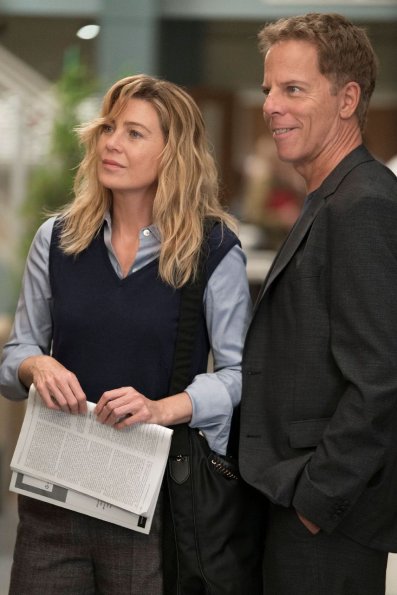 GREY'S ANATOMY - "With a Wonder and a Wild Desire"/"Broken Together" - During the first hour of the two-hour season premiere, the doctors at Grey Sloan Memorial vie for a new position. Meredith is seemingly distracted and struggles to stay focused, and Maggie finds herself the keeper of a big secret while Amelia and Owen try to figure out their relationship. Meanwhile, Jo and Alex's honeymoon doesn't go exactly as planned. In the second hour, new doctors continue to shake up the hospital in typical Grey Sloan manner. Meredith bonds with a patient while Jackson struggles with the meaning behind recent experiences; and after making a life-changing decision, Jo forms an unexpected alliance. The two-hour season premiere of "Grey's Anatomy" airs THURSDAY, SEPT. 27 (8:00-10:00 p.m. EDT), on The ABC Television Network. (ABC/Eric McCandless) ELLEN POMPEO, GREG GERMANN