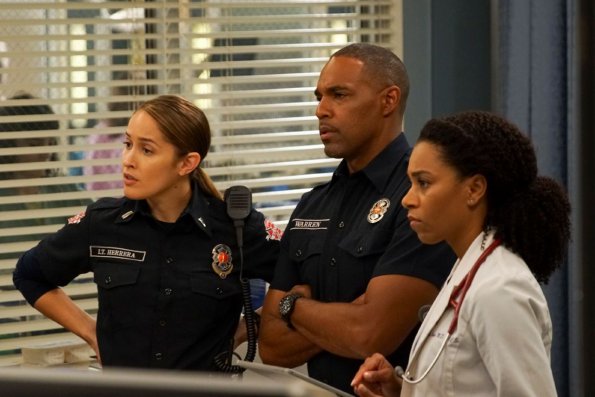 GREY'S ANATOMY - Worlds will collide in Seattle once again, as ABC is set to air a TGIT crossover event on Thursday, May 2, featuring all-new episodes of "Grey's Anatomy" and "Station 19" from 8:00-10:00 p.m. EDT. The TGIT crossover event kicks off with an all-new episode of "Grey's Anatomy," entitled "What I Did for Love," where Maggie treats one of Station 19's own, and Jo learns a hard lesson. Meanwhile, when working with a family seeking asylum, Meredith makes a call that could jeopardize her career on "Grey's Anatomy," THURSDAY, MAY 2 (8:00-9:01 p.m. EDT), on The ABC Television Network. (ABC/Scott Everett White) JAINA LEE ORTIZ, JASON GEORGE, KELLY MCCREARY