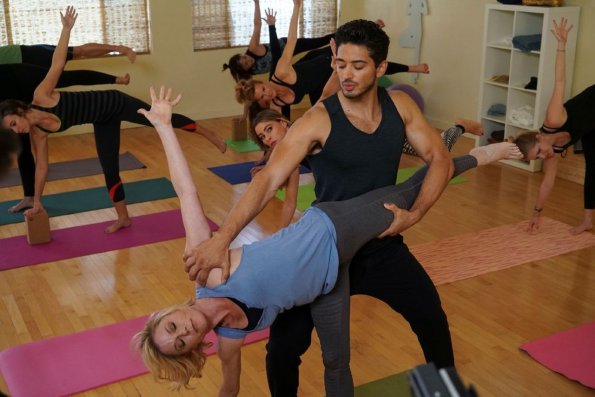 MODERN FAMILY - "The Cover-Up" - Phil has a new client who happens to be "his type," and knowing that might get him in trouble with Claire, he tells some seemingly innocent lies, which then lead to more, and soon enough he's in a full spiral. Meanwhile, Gloria suspects her yoga instructor has the hots for her and asks Claire to come with her to class, but the instructor ends up giving Claire a lot of inappropriate attention, and she likes it. Now that Jay is retired, he is filling up his time making a web show but becomes obsessed with tracking down a hateful troll who is leaving horrible comments. And Mitch and Cam try to teach a skittish Lily how to ride a bike by leading by example, but easier said than done, on "Modern Family," WEDNESDAY, MARCH 16 (9:00-9:31 p.m. EDT) on the ABC Television Network. (ABC/Ron Tom) JULIE BOWEN, SOFIA VERGARA, CHARLES JUSTO