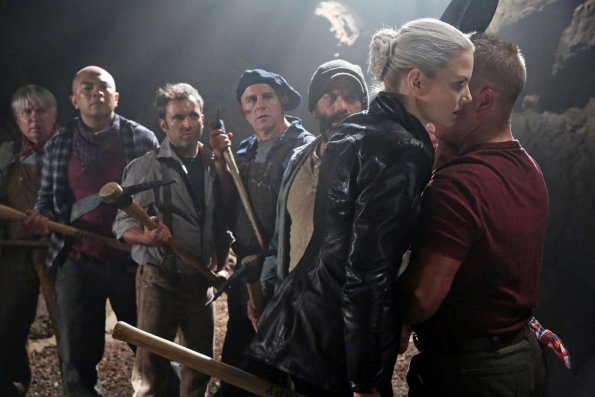 ONCE UPON A TIME - "Siege Perilous" - In Camelot, the heroes feverishly work to free Merlin. Determined to help Emma, David embarks on a quest to retrieve a magical relic that Regina could use to communicate with the imprisoned sorcerer, but, when David leaves, Arthur insists on joining him because the dangers ahead are greater than he can imagine. Meanwhile, Mary Margaret discovers the fate of her old friend Lancelot. Back in Storybrooke, Arthur seeks David's help to catch a thief who threatens the safety of the citizens of Camelot. Across town, Emma reaches out to a conflicted Hook as she sets about her plan to draw Excalibur from the stone, on "Once Upon a Time," SUNDAY, OCTOBER 11 (8:00-9:00 p.m., ET) on the ABC Television Network. (ABC/Jack Rowand) DAVID-PAUL GROVE, MIG MACARIO, GABE KHOUTH, FAUSTINO DI BAUDA, LEE ARENBERG, JENNIFER MORRISON, MICHAEL COLEMAN